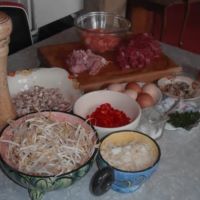 One of the best things about travelling abroad is trying out new experiences, especially if those experiences involve food.

Squid on a stick was better than expected, but wasabi octopus didn't quite hit the spot.  These culinary adventures were experienced on a recent three-week trip to Japan with Hamilton's Wai Taiko drummers - of which I've been a member since 2007.

We were celebrating our tenth anniversary as a group, and where better to do so than in the home of taiko, the land of the rising sun.

There was a lot of rice and fish, but thankfully, there was more than just seafood to tempt our taste buds.

Okonomiyaki was one of the star dishes I had the pleasure of meeting. The name translates roughly to mean "whatever you like, fried" so what you put in it and the way you make it are open to interpretation.

I tried it twice while in Japan, but I could have easily eaten it every day. Okonomiyaki consists of a bed of fried cabbage held together with flour, egg and dashi (Japanese stock). From there, you can get as creative as you like. Egg, mung beans, steak, prawns, bacon, chicken chunks… if you like eating it, throw it on.

It's cooked like a pancake - you need to be a dab hand with a fish slice to flip it in one piece - and eaten like a pizza, cut into wedges. The whole thing is then drizzled with Japanese mayonnaise and okonomi sauce, which takes it from merely tasty to mind-numbingly delicious. As a final touch, parsley and bonito flakes go on top. The hardest bit of the whole process is devouring it with chopsticks.

When I returned to New Zealand with a head full of culinary musings and a camera card of photographs, I was eager to experiment. I loaded the pictures up on the screen to show my parents and a close family friend, who I was positive would share my excitement. Not so. They sniggered.  Then they muttered about it looking "kinda stodgy" and "unattractive". To be fair, it wasn't a great photo. But I held tight; I would make them eat their words, and they would be the tastiest words they'd ever eaten.

The following weekend, ingredients, sauces and toppings were assembled for the Moment Of Truth. Within minutes of starting, the oven was scattered with bits of cabbage, bacon and prawn, because flipping the blighters is an acquired skill which we had not yet acquired. But a good time was had by all and those who scorned came to a unanimous decision: Okonomiyaki? Drop-dead delicious. Mission accomplished.

Now, okonomiyaki is a favourite in our household. It's a real crowd pleaser, and great when you have friends around. Especially when everyone makes their own and you compare notes at the end as to the messiest, most deftly flipped and so on. Actually, it doesn't matter if it doesn't flip well, because it all looks the same if you put on enough sauce.. Okonomiyaki really is a perfect dish: it's fun to say, fun to cook and - most importantly - fun to eat.

on how to make it.  This was also great fun and stars Tess the Wonder Dog in her first film role.

With a large knife, finely slice cabbage, discarding the white core. Mix together the dashi - add a little of the water to a jug and stir in the powder.  When it is all combined, add the remaining water.

Mix together the flour, egg and dashi to a smooth paste, then stir in cabbage.  The cabbage should be well coated with the batter, but not awash in it - some fine adjustment might be necessary.

Warm up a hot plate, with a little oil.  When hot, fry whatever toppings you want.  Arrange toppings into a circle, and layer the batter on top of this, smoothing it down and patting it into a circle shape.  Not too big, about the size of a sandwich plate is good.

Cook for about three more minutes, then carefully flip with a slice.  If the circle is too big, it can be sliced in half.  It still looks great.  Again, pat into a tidy circle.

Continue cooking for five or six minutes, watching the heat.  A fried egg can be added on top at this stage, or the steak.

Place onto a plate, and drizzle okonomi sauce on top.  Then pour on the mayonnaise, in straight crisscross lines.  Lastly, add parsley and bonito flakes.