Some thieving sod ate my strawberries!!   I hadn't been at home all day but the time had skipped through quickly as my thoughts tripped no further than dessert and my sweet tooth.   I raced out that evening, basket in one hand and scissors in the other to find...NO STRAWBERRIES!   Just the stubs, and a couple of happy-looking thrushes.   Still, I suppose it's a fair deal - Albert had eaten one of their mates a while ago.   The strawberry container with the next ripest strawberries in now has some net curtaining draped over the top and anything that beats me to my treat this time is going to die a horrible death!

My predictions about the weather for this month have been, so far, correct and Mrs. Pig's housewarming party was cancelled.   I would have needed a canoe to ferry everyone over to see the new pen as the gale force southerly bit through everything and the torrential rain unceasingly poured down.   Thank goodness the pen had been finished and Mrs. Pig and her piglets had somewhere nice and warm to go.   Cream Cheese came in for milking soaking wet and shivering and, once again, I swung into action.   I have had to do this so often now I have decided to call this year the "Year of the Mud"!   No one grizzled as they were all allocated their dry spots and tucked up.   Poppy and Cream Cheese were rugged up and given a calf pen each, Bossy Boots and her calves were invited into the middle cowshed stall, the rest of the calves were happy to snuggle into a bed of straw in the end cowshed stall and Luke and Last Thyme had to share the stable.   And that's where everyone stayed for two days!   To go outside was to risk life and limb and I was so thankful I had access to easy feed supplies.

The turnip crop planted back in September was semi-ready to be pulled, the extra manure put into the citrus garden had given the nasturtiums a huge boost and I had left pruning the runners on the grapevine for an emergency - which was this week!   A quick dash around the garden twice a day gave everyone their greens and I decided (once more) to stave off depression by opening one of the bales of oatage.   Interesting stuff - oatage.   Long, coarse, tough to pull out of the bale, and a sweeter smelling product than baleage, but it did the trick.   Everyone was sheltered from the storm and well fed with the minimum of fuss and effort and, above all, the milk supply stayed steady which is a real indication of happy cows.   The garden looks battered and the concept of having Middelmost looking like a Botanical Garden for Christmas has gone right out the door.   Yet, as the old saying goes, the difference between a good haircut and a bad haircut is three weeks.   With any luck, most of the butchered areas in the gardens might have recovered sufficiently to look presentable for Christmas visitors.   And, on the positive side, with me pulling the turnips early, there is now plenty of time to get a second crop of peas in for feeding out in the dry part of the autumn.   The climatic extremes we are having can't last - there must be settled, calm, pleasant-to-be-outside-in weather on the horizon somewhere...somewhere...I'm still looking...In the meantime, I guess we shall have to tolerate its menopausal moments as best we can. 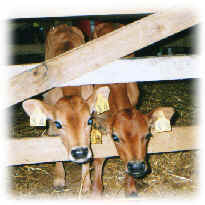 It's time to decide which calves are to be kept for the house-cow herd, which calves will be contract-grazed out for the beef herd, which calves can be shared for the freezer, and which calves are to be sold.   Pumpkin and Pie were destined for the house-cow herd but the farmer I bought them from wants to buy them back and I have to be sensible.   Jonquil is definitely staying and Gumboot is so loveable, even though she is not a straight Jersey, that my mind has been made up for me in the house-cow department.   A farmer up the road wants every white-faced Hereford heifer I have and the farmer who owns the property where they are grazing at the moment would like any Hereford beefy I don't want to keep.   That's the easiest marketing I have ever done but, as my, Learned-Friend-of-Many-Years says, "If your stock looks good they will sell themselves."

Next week all of the beefy weaners will be weighed and a pricing decision made and accepted by all concerned.   Once these weaners are sold, DOING-THE-DREADED-FARM-BUDGET will have to be addressed.   This is the part when you must callously pre-judge the year to come and set the physical, mental and financial goals.   It's then a case of crunching the realities into a workable package and deciding what you can and can't do.   On a small property - especially one which is not considered an economic unit - there is no friendly bank manager available to up your overdraft of $30,000 to cover an unexpected mishap or an unforeseen opportunity.   Most small farmers have to rely on their own personal resources and Middelmost is no exception.   I have a clear comfort zone in which I like to operate and all hopes and aspirations for the coming year have to be contained within this.   Most of it is easy.   Next year I want to be warm, well-fed, comfortable, stress-free, happy, and healthy.   It's the add-ons that make things difficult - a new saddle, a new roof, a new car, and a shopping spree in Paris.   After pushing all of the figures around for a day or two I will probably settle for the new lounge suite I had set my heart on for this year!

We will still all love each other, the animals will be warm, well fed, comfortable, stress-free, and happy and healthy with me and, although tele for Mrs. Pig is out of the question, there is no reason why she can't have a nicely framed pin-up picture of Mr. Pig hung in the back corner of her new house.

Details
Written by: Althea of Middelmost