No plans still for the wedding, though we still keep saying 'next year', but who knows. We're living in a cold rental at the moment, it's going on the market soon so that'll be fun, but we don't intend to renew the lease in Nov anyway, so will move again. *sigh*

I'm still running the dog groomers, I absolutely love that job! I don't go to work anymore, I go to have fun! Ok, so it's still 'work', but I am loving it, even the hard bits like this dog last week: 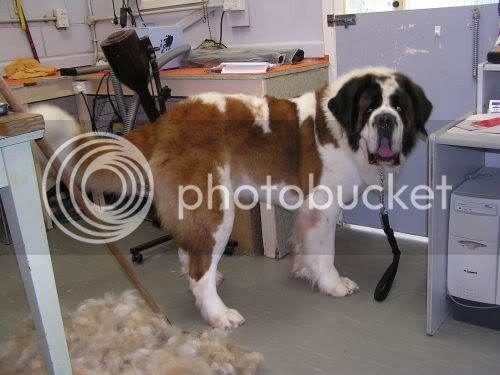 not a bad looking boy after it all, and the owners (who'd never had him groomed properly before) were shocked with how awesome he looked now, that they are bringing him in every few months to keep him like that (despite the price tag; he took forever to do!). Did I say I love my job? [

] I have full intentions of buying the business off my boss when she retires in a few years.

Did I mention it was cold?

We've had some snow, though that's all melted now. We had an impressive frost or two too. Now it's just wet.

brr!!! We do have a nice open fire in the bedroom though, and the computers are in there too, so we basically just live in this one room at the moment, where it's warm! It was cold enough that there was a thin layer of ice in the toilet the other morning...

Yes, I still have lots of rats. 15 right now. Though most of my girls are spayed and I'm going to spay the last of them as soon as I have the money, cos I don't have the time for another litter right now! I wasn't going to get any more, but one girl did come along that managed to weedle her way here! She was dumped with the SPCA, with a hugely fat belly. SPCA didn't want to look after her and bubs, so contacted me to take her. I took her, fully intending to re-home all her bubs and her when she had them and they were old enough. Except after a week of still not having her bubs (they're only pregnant for 3 weeks, and we all thought she was due to have them the day I picked her up!!) I bit the bullet and risked killing any bubs to send her in to be opened up. Turns out she had the hugest pyometra (infection/pus filled uterus) ever, and if I had have waited any longer it'd burst inside her and kill her outright. For an idea of size, she was 210g after it got removed. The removed uterus full of pus was 151g. [

Apart from them, I still have Fleck, as well as another cockatiel now too. I still have Riki the dog. I still have Blossom the sheep, we worked out she must be 8 years old now and still going strong. Mr Ed is getting on a bit now too, but is doing perfectly fine, he's fat and hairy!! hehe.

We do have a couple of new additions that I don't believe I've posted about.

My boss at the groomers breeds burmese cats. I got offered last year, either a christmas bonus, or a kitten. Guess which one I chose...? lol! I got to be the first person there when they were born, and basically went to see them every day. I got first pick of the litter, and decided on the girl who fell in love with me from an early age. hehe. Fiance decided he'd better get one too, though he has to actually work off the cost of his one (he does work for my boss around the house) and he didn't choose his girl until they were much older. And so we got the two girls of the litter, the entire litter was lilacs, the girls are lilac tortoise-shell. I took the whole litter in when they were about 7 weeks old, as my boss was going in to hospital and her hubby wasn't in the best shape to look after them at home. They were weaned by then (the grandmother of them had been caring for them more than the mum by that stage!!) one boy stayed local with a family that have wanted one for ages. The other went to auckland to my bosses family up there.

They're 5 months old now, getting spayed on tuesday along with their grandma. My girl, Jasmine, has a show in august, fiance doesn't want to show his girl though, doesn't see the point. [}

They are adorable girls though, we have gotten exactly what we wanted from them, we wanted two cats so they'd entertain each other, but we wanted our own cats too, and Jasmine is very much my cat, and Freyja is very much his. Both will come to the other fine, but they both pick each of us out much more too. They spend most of their time together, and still travel to work with me several times a week so they're used to traveling.

It is interesting that Freyja doesn't like dogs much at all (nor does fiance) where-as Jasmine is utterly determined to win over every dog she meets and make it a friend. That's my girl!

Hmm, can't think of much else to add now. (I hear you all breathe with relief) I see I haven't lost the knack of waffling anyway!!

Ah well, I look forward to seeing some of you in a few weeks and catching up, miss ya all.


Owned by a standard poodle, a couple of burmese cats, a miniature horse, & a budgie.
Also proud mum to Caleb and Piper

Less More
14 years 11 months ago #47830 by Birman Babe
Replied by Birman Babe on topic it's been a while! (pics)
Aaaah Waffles, your Burmese are gorgeous and well done on the dog grooming!

Less More
14 years 11 months ago #47833 by ronnie
Replied by ronnie on topic it's been a while! (pics)
Hey Waffles, lovely to hear from you. Do you still do much mini horse
stuff?? Like shows etc? I think you might know my sister-in-law as she shows her minis and has got into gig riding, or whatever you call it.

Great to catch up on you and your animals. No need to be in too big a hurry to get married - you will do so when the time is right.

Make sure your next shift is to somewhere that will be warm in winter.

Less More
14 years 11 months ago #47835 by Muddy
Replied by Muddy on topic it's been a while! (pics)
they are some great photos there
greenwelliesbalertwine.myfreeforum.org/

Less More
14 years 11 months ago #47837 by Dream Weaver
Replied by Dream Weaver on topic it's been a while! (pics)
Great pics. glad to hear all is going along nicely for you mate. Cats are lovely and so good that you got two so they are company for each other and can grow up together. cute.

Less More
14 years 11 months ago #47840 by Ronney
Replied by Ronney on topic it's been a while! (pics)
Great to hear from you - and to know that you can waffle as much as you ever did:) Great photo's but for heavens sake find somewhere warmer to live next time round. Love the cats.

Less More
14 years 11 months ago #47856 by hilldweller
Replied by hilldweller on topic it's been a while! (pics)
Nice post Waffles! That's a great photo of the cat. Is Blossom in lamb again?
hilldweller

Less More
14 years 11 months ago #48265 by Midge
Replied by Midge on topic it's been a while! (pics)
Great to catch up on your news Waffles[^] I enjoyed the animal pix but I especially like the first pic of the frosty car badge. You should offer to sell it to the car magazines!!

Keep up the good work lass! Call in if you're up visiting the inlaws.
Cheers:)
[SIGPIC][/SIGPIC]Cheers[