Less More
9 years 7 months ago #33634 by Anne
Christmas parade!! We did it - photos added post 4. was created by Anne
I have been asked to take my ponies and carts in the local Christmas parade. I wasn't sure at first - its a fairly big ask for two country ponies, but last week we took them into town on Sunday and drove them around. Rupert kept neighing at his reflection in the mirrored windows of the shops - which had us giggling like idiots

[8D]. They were happy for kids to come and pat and poke at them, asking questions and squealling - hardly moved a muscle.

Farmlands gave me some money to spend on decorations and we bought heaps of green and gold Christmas stuff. We had a bit of a dry run today with glitter on them, antlers, gold stars on their feet and bells on their legs. The bells are great - really Christmassy. Now we're looking forward to it - we both think the ponies will cope really well. We've each got a leader to walk beside the pony and we'll all dress up and have some fun. We're not allowed to give things away from the floats this year, but there is a picnic in the park afterwards - we might give some cart rides and hand out lollies etc - depends on how the ponies feel after the parade.

Any ideas for decoration most welcome. Anyone in the Wiakato region who would like to come to Te Awamutu on Saturday 8th Dec and help decorate carts and ponies would be even more welcome.

Anne;445827 wrote: ...Rupert kept neighing at his reflection in the mirrored windows of the shops - which had us giggling like idiots

Less More
9 years 7 months ago #445836 by max2
Replied by max2 on topic Christmas parade!! We did it - photos added post 4.
Congrats Anne and what a wonderful community spirit you have!

We have taken Mr Bill Be Afraid to two local fund raisers for pony rides and his behaviour was exemplorary. I actually think he enjoyed it!

Less More
9 years 6 months ago #446598 by Anne
Replied by Anne on topic Christmas parade!! We did it - photos added post 4.
We had a ball! I mentioned to one of my farmer friends that we were going in the parade and his 11 year old son over heard and asked if we needed elves

. He then organised a group of his friends to come and be elves and fairies.

We ended up with 8 kids and 5 adults in the parade and about 4 lots of parents helping get carts and ponies decorated. One dad was obviously quite competent around ponies and was a great help.

Anyway here's the photos:
Getting ready. Rupert thought it was most undignified to have all this stuff on him. Titch loved the attention!

Feet! This was fun and LOTS of people noticed. I've no idea how long they'll last.

Waiting in line. This is where I thought we would have the most problems. Titch really isn't a standing still sort of pony. This is the reason I wanted people on foot. They distracted Titch and kept him happy. Rupert didn't care - if he had a person beside him, nothing was going to worry him.

The parade itself. We weren't allowed to throw out lollies or give away during the parade, so I bought a whole lot of bubble blowers and the kids blew bubbles, danced around, yelled at their friends, swapped places in the carts and waved at everyone.

The end: On the way back to the truck.

I took electric tape and put it up around the ponies to stop kids from rushing in. We came back to the truck and people had parked cars etc right beside it - in the shade of the tree. The organisers ran around and found car owners and got them moved. Next time I'll leave a tape pen up. Once the ponies were unhitched we had a constant stream of kids (and adults) coming to pat them and talk to them. A few got to sit on one or the other.

During the parade the ponies put up with our kids blowing bubbles, lots of loud music, loud speakers, trucks, fire engines, police cars, bands, heaps of people, kids spraying silly string, people on stilts - actually, you name it, it was there.

When we finished, the crowds congregrated near where the truck was parked and then there were balloons, beach balls (one of the companies was giving them away and there was just about always one blowing into the ponies' legs), kids galore, more fire engines, more loud music, loud speakers.

We were thrilled with them - and we've been asked to come back again next year already!

The kids all had a ball - and hardly any of them have had anything to do with ponies - but they're all farm kids and so knows what sort of thing frightens their calf club calves etc.

It was heaps of fun! 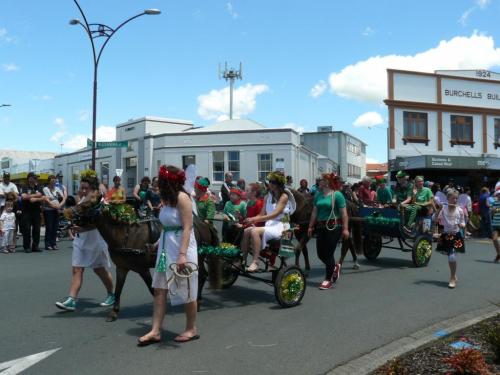 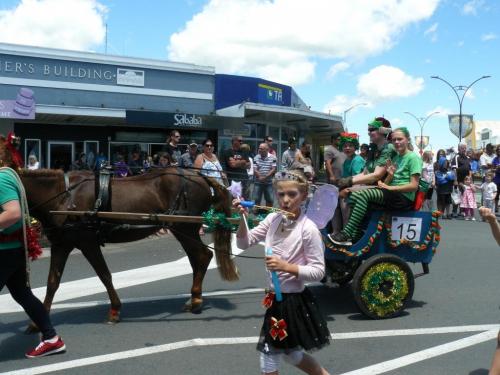 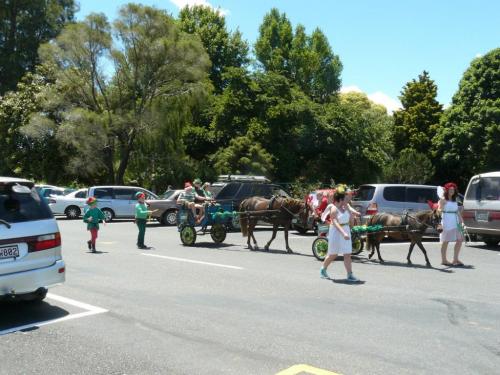 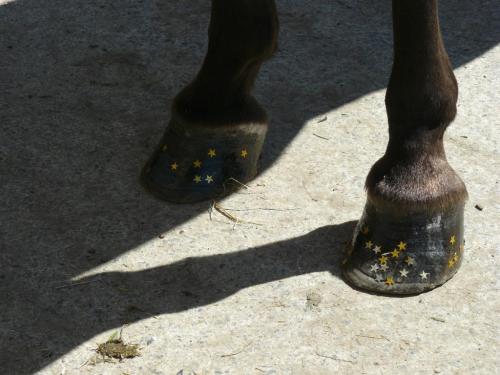 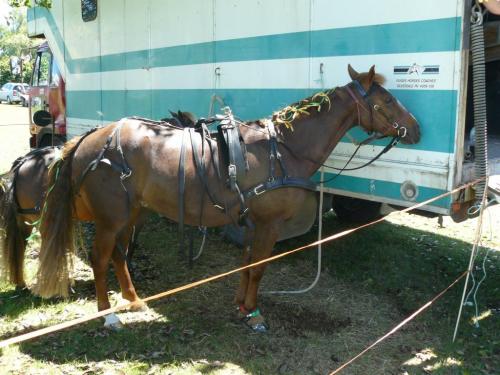 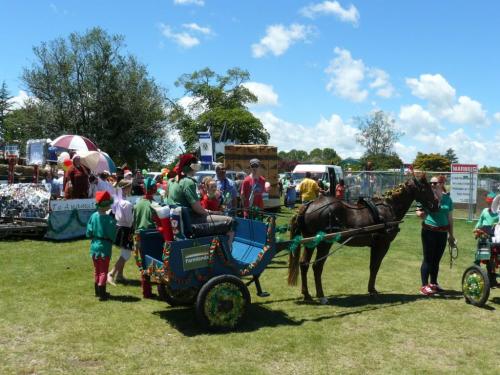 Great photos and your horses did so well

Is Rupert the kaimanawa pony ?
5 retired Greyhounds ( Bridgette , Lilly, GoGo,Sam and now Lenny) 15 friendly sheep all of whom are named and come when you call them

, 2 goats, Mollie and Eee Bee :
Olive trees , .. old bugger doing the best he can with no money or land

Less More
9 years 6 months ago #446607 by FarmerEms
Replied by FarmerEms on topic Christmas parade!! We did it - photos added post 4.
Looks great! Glad it went so well for you too.
Growing the LSB one kid/lamb/calf/piglet at a time.. [8D]

Less More
9 years 6 months ago #446608 by Hawkspur
Replied by Hawkspur on topic Christmas parade!! We did it - photos added post 4.
Well done!

Less More
9 years 6 months ago #447144 by sundaysbest
Replied by sundaysbest on topic Christmas parade!! We did it - photos added post 4.
That is so neat, you must be chuffed with your lovely ponies!!!