Mothering is all about...sharing the workload

Less More
11 years 8 months ago #25172 by highgirl
Mothering is all about...sharing the workload was created by highgirl
My two cats have just had kittens within a week of each other. They had them in two separate wardrobes, and then to save the kittens from the inquisitive hands of a two year old

, yesterday I moved both families into two boxes in the laundry. For the first day, they seemed to swap kittens from box to box and today they had moved all the kittens into one box and are all sleeping together

Mum's must have joined forces and thought they may as well help each other out...they have 9 kittens between them, and a mum permanently on duty to look after them - they are even sharing feeding [ 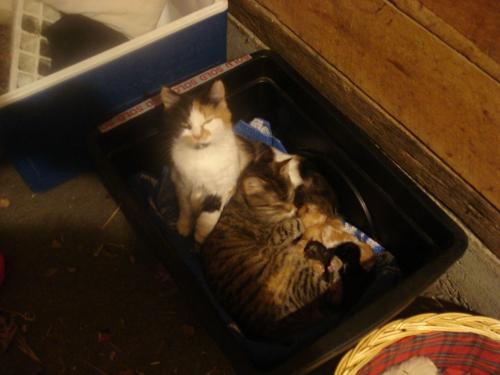 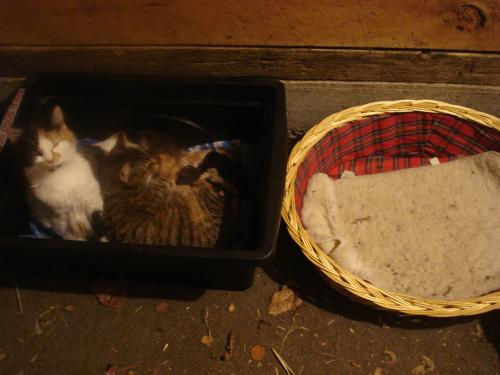 Less More
11 years 8 months ago #353399 by Ronney
Replied by Ronney on topic Mothering is all about...sharing the workload
Highgirl, while that is neat (and it is) it's not as rare as one might suppose but I suspect a lot of it depends on how the animals have been brought up and treated.

Many years ago I had two queens that did exactly as yours are doing and they did it very well. Much later two sister sows farrowed within 12 hours of each other and reared each others - in the end I had no idea which piglet belong to which sow (all but one were pink) and I don't think they did either

Another time two sows were in seperate farrowing houses with a gate between them. There was a 6" gap under the gate and the little ones would go from pen to pen and they too fed off whichever sow was nearest. In the end I just opened the gate.

Back in the days when I sharemilked the cows with their calves, I had to watch it. I could milk a cow, let it out with the calves on the understanding that she wouldn't let another calf feed from her only to find her feeding four[:0] The next cow out would feed the remaining two and the other four cows would get bolshie at anything other than their own - but not all the time. It became a nightmare as some calves were getting too much and others weren't getting enough so I had to redesign the way things were done.

I think that some species, living in a close and relaxed atmosphere where there is little or no competition for food or dominance, will become quite happy to feed whatever comes their way so long as some of their own are in the mix. I still have a cow that, if dumped into a paddock with calves, will feed other calves so long as one of them is hers.

Less More
11 years 8 months ago #353400 by Stikkibeek
Replied by Stikkibeek on topic Mothering is all about...sharing the workload
We had a horse that had a strong mothering drive. First noticed when she tried to drive her sister away from foal. Had to separate her so the real mother could feed her foal. She was a beggar when it came to calves too. She would drive the cow away and pinch their calves. No matter she didn't have milk for them, any new born calf was fair game.

She later became a great mother of five foals.
Did you know, that what you thought I said, was not what I meant :S

Less More
11 years 8 months ago #353404 by terralee
Replied by terralee on topic Mothering is all about...sharing the workload
A few years back when I weaned my 2 fillies and I put them in with Old Robin who is their Grandma ...she was great at looking after them ...even to the point of letting Starshine suckle[:0] Mo didn't want to tho' I am sure Robin would have let her too.
...Robin is also very protective of any new born or young baby animals (lambs and calves) and really herds Mo (nearly 7 now) and Kazz (blooming big Irish hunter) right out of the way if they are in the same paddock and getting too rough and/or close to the babies[^]
I love nature