Got my new tool

Less More
12 years 9 months ago #20000 by JEF
Got my new tool was created by JEF
Got my new shooter its a ruger m77 in 308 , stainless steel , its slightly more powerfull than my air rifle and hopefully has enough oommmph to get those bigger wabbits and possums at the top of my willow tree who were previously out of range and taunting me

that'll learn em , cheers for your help kiwi303 heres that pic I promised 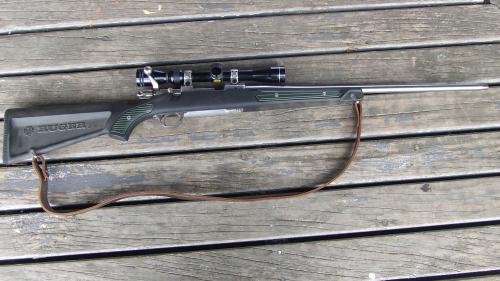 Less More
12 years 9 months ago #295639 by Hasbeen
Replied by Hasbeen on topic Got my new tool
Hold the bus ---- that is a serious gun, more your deer than your possum up a tree.
That baby will send a bullet close to a mile [:0]

Or am I thinking of a 30 08; this getting old is confusing
Recovering Lifestyler

With the licence obtained, a .22 is dead cheap now since the biggest cost if often the licence not the .22

the last one I bought cost me $75 including shipping from Thames, why spend a $1.50 bullet on a possum when you can use a 10c one

The .308 is good for wascally wabbits on the other hand

The scope looks like a 3x-9x vari-power, crank it up to 9 and decapitate those pesky grass thieves at ranges up to 350m as you get used to the rifle and learn it's quirks

a 130gn .308 Varmit SPBT whipping along at a higher rate of knots can almost cut one in half.

from the photo, the barrel colour changes at the muzzle, it's threaded to take a can silencer? that will help stay on good terms with the neighbours

The .308 is a .30-06 which has been shortened. The .30-03 was intorduced as the governemnt round by the US Army with their 1903 Springfields. there were problems with the bullets falling out of the cases and spilling their powder, so the case neck was lengthened in 1906 to hold the projectile better and the resulting round was called the .30-06 (calibre .30, model of 1906) later when the US army decided to intorduce smaller rounds than the M1 .30-06 ammo after WWII, they chose the M14 as the gun using a shortened .30-06 case holding less powder, this was called the 7.62x51mm round and NATO was forced to adopt it. Winchester made a sporting version, called the .308 Winchester.
You Live and Learn, or you don't Live Long -anon

Less More
12 years 9 months ago #295649 by JEF
Replied by JEF on topic Got my new tool
yeah its threaded for a silencer , cost $225 for a s/s silencer , I will get one , your right about the possums too I am getting a 22 for them , even a jw15 will be ok , thing is ill be hanging out on DOC land and the permit I have specifically excludes rim fire so I got this first , also it was a hell of a bargain , BTW k303 what dont you know about guns ? you can stop in here for a coffee when ever , cheers for your advice

Less More
12 years 9 months ago #295661 by Kiwi303
Replied by Kiwi303 on topic Got my new tool
that no-.22s and no-shotties rule is supposed to stop people sniping at kereru and other natives. along the lines of "if they use a centrefire, there won't be anything left for a meal, so they won't use a centrefire, so the birds are safe."

the problem is the sort of folks that shoot a nice pigeon pie aren't going to take any notice of a no-.22 rule, they would just sneak around and don't do it when a anger is around.

It's also to restrict the ammo used to more expensive stuff than the cheap .22 bulk rounds, so the type of stupid twit who gives responsible hunters a bad name by shooting anything that moves, will be less likely to do it as a consequence of the heavier hit on the wallet.

Are you going to reload? If you reload you can load a light charge with a cotton wool wadding over the charge and use a small calibre cast lead pistol hollow point as the projectile at low velocity.

That in front of a low charge of a slow burning powder and you'd have a good .308 possum round, low velocity, won't travel far, reduced lethality downrange, but at short tree-height ranges, quite enough to let you pluck mr Possum

Lead can be salvaged from old batteries, not an ideal lead alloy for big game hunting, but more than adequate from small game. Molds and lead pots are available for nearly every calibre

You Live and Learn, or you don't Live Long -anon

Less More
12 years 9 months ago #295669 by JEF
Replied by JEF on topic Got my new tool
Nah , think im just gonna get the cheap 22 , cheap to buy cheap to shoot, or I might get the 870 remington next , plenty of shot options for those