Less More
8 years 8 months ago #36206 by farnorthtui
Concrete Pig Housing was created by farnorthtui
Hi there
I am new to this group and live in the Far North of NZ. My first love is chooks, but I am trying to help out someone who is involved in a charity project in Samoa developing small scale pig farming (6-7 pigs). They want a housing system built and then the effluent will be composted and used for fertilising trees and eventually vegetables in a eco-friendly / hygienic manner. As a child, my parents built a piggery from concrete blocks and I think it had 4 pens. It was built with sloping floors, concrete feeding troughs built into the walls, water on-tap with a nipple that the pigs would touch to drink from, effluent would run off and the solids would be manually shovelled. The piggery has been demolished now, but I wonder if anyone has one and if possible - dimensions or plans. Or perhaps there is an old one that we could get measurements from - any ideas would be appreciated - also images.

Less More
8 years 8 months ago #472948 by Ruth
Replied by Ruth on topic Concrete Pig Housing
That's the remains of an old one built here decades ago when only the cream was taken out of the valley in cans. It has concreted-in feed troughs, sloping floors (somewhere under the grass) a drain at the end taking everything away to the river (as was the practice in those times) and it had a roof over the back half. 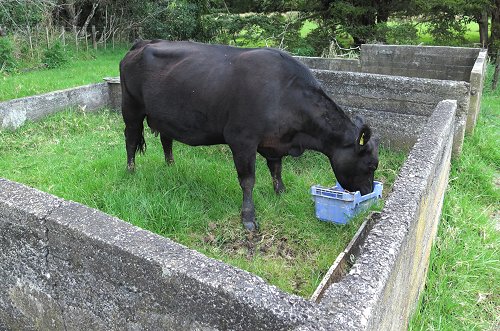 Less More
8 years 8 months ago #472951 by igor
Replied by igor on topic Concrete Pig Housing
That looks similar to what my brother has on the homeplace Ruth. Built by our grandfather in the 1950's it consists of, I think, five regular pens in an L shape, and a farrowing house at one end. From memory the troughs are glazed earthenware half pipes set into the concrete. The concrete nib walls are about two feet high and there are timber walls above that. I have some photographs somewhere but they are not digital and I'm not sure where they are.
Where our other grandfather share-milked they had a concrete block setup with a number of pens on each side of a central aisle. I remember a lot less about that one as I was about ten years old when he left there upon his retirement.
I could possibly sketch something that may be of some use to you and post it on here.
My own pigs mostly live outdoors apart from one pen that is in the barn and has a timber floor over half its area.

Less More
8 years 8 months ago #472958 by Ruth
Replied by Ruth on topic Concrete Pig Housing
Igor, that sounds exactly like what we have left. From vague memory the wooden walls were still there when I first came here in the 80s. The glazed half pipes are still there - and a little visible in that picture. Stephan said he built a farrowing pen behind these in later years because they kept pigs when they had house cows.
www.diggersvalley.co.nz

Less More
8 years 8 months ago #473048 by farnorthtui
Replied by farnorthtui on topic Concrete Pig Housing
Thanks Ruth & Igor. Yes Ruth, probably similar to what we used to have. I think a lot of dairy farmers kept pigs in the days when cream was sent to the factory, to make use of the skim milk. Pig farming is a lot different now. Any chance of measurements Ruth? Sketches would be great too!

Less More
8 years 8 months ago #473071 by Ruth
Replied by Ruth on topic Concrete Pig Housing
Yes sure, bring a tape measure. I just wrote a long and friendly reply and it's gone. Too tired.
www.diggersvalley.co.nz

Less More
8 years 6 months ago #476107 by tonybaker
Replied by tonybaker on topic Concrete Pig Housing
I made a concrete house as nothing else would keep them in! It was two "rooms" about 4 sq metres each. Concrete walls and floor, back room was for sleeping. Put down wooden pallets and straw then lowered the ceiling so there was max heat in there. Outer pen had drinking nipple and heavy feed trough. Put sawdust in there and it made good compost. Idea is to stop them using up too much body weight running around. When I did let them out, they got sunburned! Make sure door is very strong, I cast the hinges into the wall.
5 acres, Ferguson 35X and implements, Hanmay pto shredder, BMW Z3, Countax ride on mower, chooks, Dorper and Wiltshire sheep. Bosky wood burning central heating stove and radiators. Retro caravan. Growing our own food and preserving it. Small vineyard, crap wine.